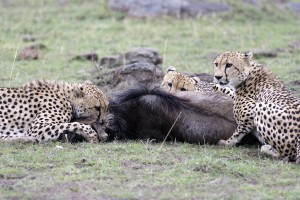 These three young cheetah males are actually very powerful, hunt together, take advantage of any kind of possible prey.

In this case, one of them caught an isolated young gnu, just after the rain at the end of the afternoon. What happened seemed quite normal: They need to kill the prey (quite commonly by strangling it) and start eating (young and sensitive minds may not appreciate a quite gory natural scene of such a raw dinner). Since the cheetahs are not very powerful animals (they are fast but slender predators), they keep checking around them because once they are disturbed by other predators (usually hyenas) they leave the scene and do not return.

The two hyenas we see in the third photo did know about this kind of natural rule. They were arriving quite certain that they could easily grab the carcass and eat the kill so easily won. Unfortunately, these three cheetahs are definitely not playing by the book. As soon as the hyenas appear, one of them did not merely leave the kill, but ran to the hyenas and started chasing one of them, kicking it.

This led to a very unusual sight: Three hyenas, totally disoriented, lying low and whining a few feet from the carcass they could see, they could smell, but were not allowed to taste.

A cheetah plays in the snow!