The king cheetah is a very peculiar sub-species of the African cheetah (Acinonyx jubatus). Its pelt pattern is notably different from the more common cheetah’s. The spots, instead of being small and well-spread, are wide, very dark and sometimes even merged into each other (specially so, on the back). 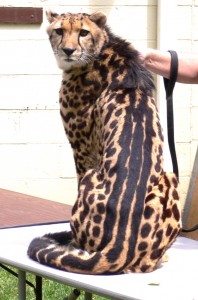 The animal being slightly larger than the more common cheetah, one better understands its title of king cheetah.

As a matter of fact, this is a rare recessive mutation (both parents must have the mutation to transmit it in a visible way to their offspring). This is about the same thing that happens with some leopards (the black panther).

The animal was known only from pelts since 1926 (initally described as Acinonyx rex before being recognized as a variant rather than an independent species), but it was not officially observed until 1974 in Zimbabve and first photographed in 1975 in the Kruger National Park (South Africa). It has been estimated that no more than 60 king cheetahs in the world, and only about 15 living in the wild. Observing it (out of zoos) is highly unlikely out of the Timbavati region of the Kruger park. Even there, you can drive during weeks without any encounter.

Astonishing, isn’t it? But I still prefer the pelt pattern of the more common cheetah; I find it more elegant.