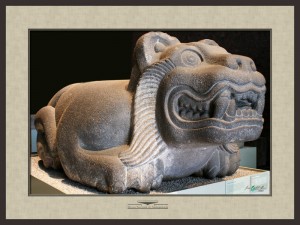 The jaguar (Panthera onca) has been a powerful predator of Central America. In Aztec times, it was not threatened to disparition as today, of course. But, on the contrary, it was considered a powerful god with extensive powers associated to war and warriors: Ocelotl.

This is the main reason why it often appears in the iconography (paintings as well as sculptures) that has been preserved from the fall of this astonishing civilisation brought up by the Aztecs. Some pictures of this moment in time.