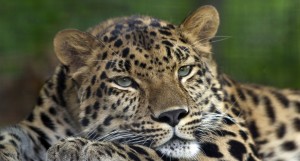 When you are the rarest wild big cat, you deserve some unusual attention. This is what explains the special treatment of the Amur Leopard or Far Eastern Leopard (Panthera pardus orientalis). It is widely considered as the single most endangered species of big cats with less than 50 individuals living in the wild (and only 10 to 15 females among them).

Because of this status, in order to evaluate very precisely the medical condition of the population, the Wildlife Conservation Society (WCS) and the Russian Academy of Sciences Institute of Biology and Soils (IBS) captured one female Far Eastern leopard in Primorsky Krai along the Russian-Chinese border. The aim is to do a medical checkup and to study the effects of the intense inbreeding of such a small animal population.

The animal, nicknamed “Alyona”, is in good health for its 8-10 years of age, but with a slight heart murmur that may be indicative of a genetic condition since it was also shared by other animals captured in 2006 and 2007 for the same reasons. It has already been released.

PS: Did you see the lovely eyes of this leopard?