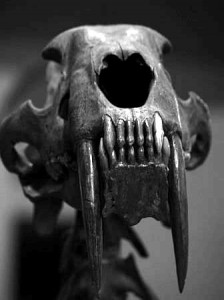 The Sabertooth cat (Smilodon fatalis) is definitely the most famous fossil big cat. Armed with impressive canines, it was certainly quite a sight. These teeth were probably powerful weapons. But they don’t tell us anything about other non-fossilized issues, like the colour of its coat or its social behaviour.

But, here comes a little surprise. As a matter of fact, it is possible to identify some elements of its behaviour, despite the millions of years between us and them.

The Biology Letters of Royal Society dated 28 October 2008 published the results of a very interesting scientific study. Observing that -today- the calls of a wounded animal tend to attract predators from quite far, but that species with a strong social bond (living in group) are attracted more than others, they went back to the sabertooth cat fossils of the amazingly rich site of Rancho La Brea in California. There, scientists have found a large quantity of sabertooth cats and their victims stuck in the tar pits that helped preserve their fossils (in large quantities). The observation of the proportion of these fossils becomes a strong argument for a Smilodon fatalis with a very social behaviour and attracted by the carcasses of herbivore animals stuck in marshes or tar pits.

Think about it. Not only was the animal an impressive sight, but it probably hunted in groups, maybe like lion prides of modern Africa! I would have liked to go on photo safari to find them.

The asiatic lion is not a species