The Saharan cheetah (Acinonyx jubatus hecki) or Northwest African Cheetah is an extremely rare form of cheetah, whose hide is very light with sparse spots, lives mainly in Algeria, Togo, Niger, Mali, Benin and Burkina-Fasso. It is usualyl considered that there is now less between 200 and 300 animals only of this semi-nomadic big cat.

The Office du Parc National de l’Ahaggar (OPNA) organised the photographic trap campaign to try and understand better the habits of this population, its size and its area of dispersal. The result is particularly interesting with a few photo shots from Central Sahara. 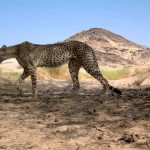 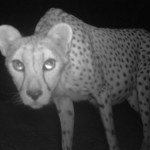 The research was undertaken by the Zoological Society of London, Office du Parc National de l’Ahaggar (OPNA) and Université de Béjaïa, with support from WCS and Panthera.