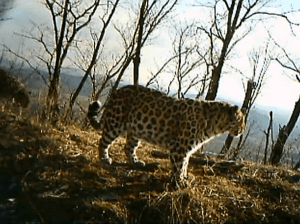 Fortunately, I am referring to a photo-video trap, not hunters’ traps.

The critically endangered Amur leopard (Panthera pardus orientalis) has been well observed by the WWF-financed counting operation in Kedrovaya Pad Nature Reserve and Leopardoviy Federal Wildlife Refuge (Russia). This is very good news since the species is believed to count only about 50 animals in the wild. But the Russian traps appear to have allowed the observation of nothing less than 12 different individuals (instead of the 6 that were believed to live in the area).

The video shows a female and a grown-up cub, which may be a farily good indication that the reproduction may allow a slow recovery in this very small population of Amur leopards.